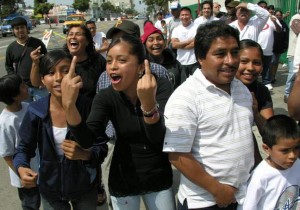 A request by 10 U.S. senators to investigate H-1B visa use at Southern California Edison (SCE), Disney,  and other large companies is being met with resistance at the U.S. Department of Labor.

The DOL “lacks a basis to initiate an investigation,” wrote M. Patricia Smith, the solicitor of labor for the department, in a letter to U.S. Sen. Dick Durbin (D-Ill.), one of the 10 senators who requested an investigation of SCE and reports of other displacements of U.S. workers as well. The department’s Wage and Hour Division “has not received a complaint from an aggrieved party or a credible source,” she wrote.

Multiple affected SCE workers in interviews with Elect Leaders stated they were required to train their foreign replacements befre being terminated.

In a joint statement in response to the DOL’s letter, Durbin, and U.S. Sen. Jeff Sessions (R-Ala.), who is also chairman of the immigration subcommittee, wrote: “We will continue pressing the Administration to use its legal authority to stop the displacement of American workers wherever possible and to conduct a thorough investigation of responsible parties.”

The DOL letter points out that even H-1B-dependent employers (which includes most IT services firms) with more than 15% of their workforce on temporary visas, “are not prohibited from displacing U.S. workers if they pay the H-1B workers at least $60,000 per year or the workers have a relevant master’s degree.”

From the perspective of five laid-off Disney IT workers, all of whom agreed to speak on the condition of anonymity, Disney cut well-paid and longtime staff members, some who had been previously singled out for excellence, as it shifted work to contractors. These contractors used foreign labor, mostly from India. The laid-off workers believe the primary motivation behind Disney’s action was cost-cutting.

“Some of these folks were literally flown in the day before to take over the exact same job I was doing,” said one of the IT workers who lost his job. He trained his replacement and is angry over the fact he had to train someone from India “on site, in our country.” according to a report by Computerworld.

Disney CEO Bob Iger is one of eight co-chairs of the Partnership for a New American Economy, a leading group advocating for an increase in the H-1B visa cap. Last Friday, this partnership was a sponsor of an H-1B briefing at the U.S. Capitol for congressional staffers. The briefing was closed to the press.

One of the briefing documents handed out at the congressional forum made this claim: “H-1B workers complement – instead of displace – U.S. Workers.” It explains that as employers use foreign workers to fill “more technical and low-level jobs, firms are able to expand” and allow U.S. workers “to assume managerial and leadership positions.”

The document was obtained by Norman Matloff, a computer science professor at the University of California at Davis and a longtime critic of the H-1B program. He posted it on his blog.

The use of H-1B workers to displace U.S. workers is getting more attention in Congress. In response to Southern California Edison’s use of foreign labor, 10 U.S. senators recently asked three federal agencies to investigate H-1B use. But one agency, the U.S. Department of Labor, wrote back last week and told the lawmakers  that large H-1B using firms “are not prohibited from displacing U.S. workers” as long as they meet certain conditions, such as paying each H-1B worker at least $60,000 a year.

You can read the rest of computerworlds article by clicking here