So T-Mobile is offering the new $120.00 10gb per line for 4 lines plan.  The plan details include up to $650 per line reimbursement for your previous carriers equipment (AT&T Next etc).  Well as we suspected things arent always what they appear.  While the retail store is quick to whip out a calculator and show you “As long as you don’t owe over $2600.00 in equipment fees we will reimburse it”.  It is far from the truth they will then apply credits to your account for your Traded in equipment which they deduct from the reimbursement amount.  So you may lay out $200-$500.00 switching over all under the promise of getting up to $650 per line back.   Well we have the paperwork showing one family switched over 4 lines paid $300.00 out of pocket at switch over.  Then submitted the equipment bill from AT&T for $1734.22.    They received only $759.04 in reimbursements which left them with a $1000.00 bill with AT&T. 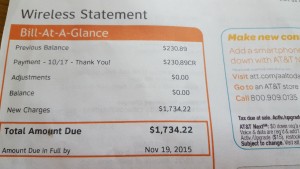 When contacted about this T-Mobile supervisors stated “Im sorry you didnt understand the way it worked”  Really …. is it that or is it done this way on purpose.  No one in their right mind would switch to save $135.00 a month to be left with a $1000.00 bill to their previous carrier.  These carriers lie and deceive to get you to come over to save $135.00 a month when in reality you just lost $1300.00.  The consumer will never realize the savings now for over 2 years.    This is the sad truth

We give a big Thumbs Down to T-Mobile for the terrible Bait & Switch.  Hopefully some state Attorney Generals step up and stop this.  Consumers are left to pay hundreds if not thousands plus penalties and interest on the debt they were led to believe would be covered by T-Mobile