She pointed out that there are several thousands of Syrian refugees waiting to gain entry into the US, noting that the number will continue to increase.

MS. HARF: “Since Fiscal Year 2011, we’ve resettled 166 Syrian individuals. But again, part of this is because the UNHCR only began this year in mid-2014 referring refugees in large numbers to the United States. That’s a process that we’re a part of, so I can expect, obviously, we have several thousand in the pipeline, and that number will continue to go up.”

Now I am willing to bet that that these are all going to be Sunni Muslim’s and not any of the currently persecuted Christian’s in Syria.  It is also important to note that the State Department and Obama administration relaxed security concerns and screening so we could accommodate all of these Syrians across the United States after pressure from human rights groups.  After all who would want to hurt us when we bring them here and fund a lavish lifestyle for years?  Coming to a city near you. 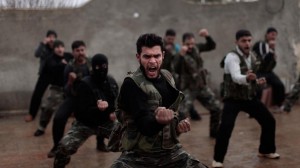